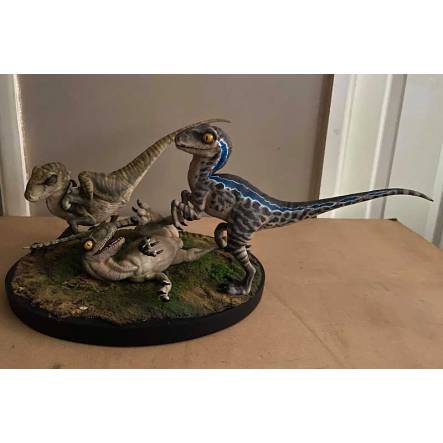 This Diorama shows 3 playing Baby Raptors.
The model was realised after an drawing by Mark 'Crash' McCreery.

Crash rendered hundreds of drawings for Jurassic Park. One that was never fully realised in the film is the drawing of the baby raptors playing together shortly after hatching from their incubated eggs. Since the Velociraptors were so terrifying in the film, maybe portraying them as cute, almost domesticated creatures wouldn’t fit. Thankfully, Crash and Universal have allowed Chronicle Collectibles to create a three dimensional product of this adorable artwork.

This Diorama was repainted by Martin Garratt. The playing Raptors in the Jurassic World movie were used as colour reference.

The Statue is numbered.

Limitation of the original series:
300

For deliveries within germany no shipping costs will be charged.