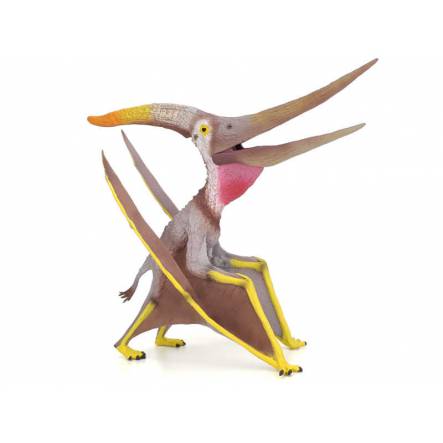 Beautifully designed toy figure of a sitting Pteranodon from the Deluxe series by CollectA.
The pterosaur figure has been hand-painted.

The flexible plastic makes this pterosaur a great toy for children.

Special feature:
The beak can be opened, and also closed again ;-)

Dimensions of the pterosaur figure:
29 cm long (from tip of beak to end of crest).
23.5 cm high

Of course, this toy is free of plasticizers.

Pteranodon was - with a wingspan of about 7 m - a large flying dinosaur that flew through the air during the Cretaceous period - about 86 - 71 million years ago. Between the elongated fourth finger and the hind legs was a flying membrane only a few millimetres thick, which enabled Pteranodon to fly long distances. The bones of the flying lizard were hollow but still very stable. Pteranodon probably ate mainly fish that it captured in flight.