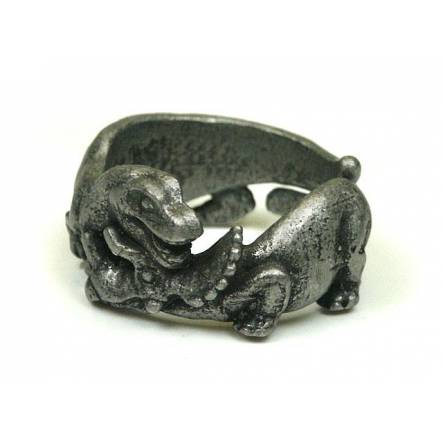 This highly detailed ring depicts T-rex and Triceratops battling in a prehistoric clash of titans! Neither of these mighty dinosaurs needs an introduction. Both Tyrannosaurus rex, among the most fearsome of predators ever to walk the land, and Triceratops horridus, with its fiersomely armed and armoured skull, lived and fought at the very end of the long age of the dinosaurs...

Some see, in this ancient battle, an allegory of timeless conflict and duality, while others might think that these two enemies should have set aside their quarrel, and instead collaborated on an asteroid deflection system (or research into viral pathogens). But however you look at it, this ring is a sure hit with paleontologists and dinosaur fanatics everywhere!

Made in the USA from lead-free genuine Pewter.

This is no cheap mass-produced item, but an unusual and beautiful piece of hardware sure to last.

14 other products in the same category: